An Introduction to the Tuscan Hill Country

Stretching east from the coast to the Apennine mountains, the Tuscan Hill Country occupy all of central and southern Tuscany and is the quintessential landscape of the region. Most of the lower elevation valleys contain smooth, rolling hills composed of clays, calcites, and volcanic ash. These clay hills are dominated today by agricultural activity, including wheat, sunflowers, vineyards, and olive groves. This gentle agricultural landscape captures the imagination and inspires millions to visit Tuscany every year. It is in this region that the fine Italian wines are produced and where most of the photos for books and calendars are taken. 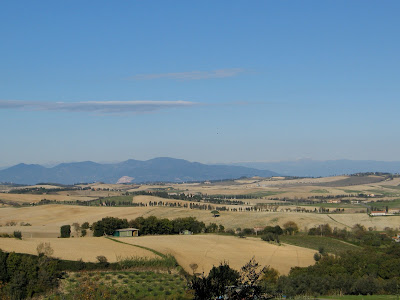 Geologically, this is a fascinating landscape, as many of the soils in this area are high in heavy metals and volcanic ash, due to the uplift and erosion of the metamorphic Livorno Hills and Colline Metallifere, as well as, periodic volcanic eruptions in the region. These rolling hills also tend to be very high in a variety of salts including halite, gypsum, and borates due to ancient invasions by the sea that resulted in large brackish lagoons. When plowed in late summer, the grey barren slopes are left containing large clumps, which melt away slowly with the winter rains. Be aware that when wet, walking across these clay hills will leave thick gooey clumps on your boots. 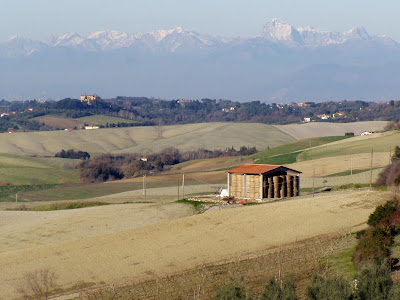 This is a changing landscape, offering spectacular hues of color throughout the seasons. The barren slopes are grey to buff in winter. They then go through a sequence of green shades as wheat and clover begin sprouting in spring. Some fields turn magenta with red clover, while others take on the yellows of mustard or tan hues of maturing wheat in early summer. A variety of wildflowers also dot the landscape including red poppies, orange asters, and purple clover. After the wheat harvest, many of the fields are converted sunflowers, which cover the slopes with a their large bright yellow flower heads. Many fields will also remain beige with the stubble of wheat until they are plowed again in fall. 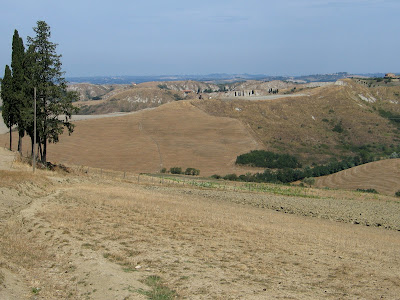 The higher ridges surrounding these lower valleys are generally rocky and contain layers of volcanic deposits and marine sediments, including metamorphic serpentines and other metal-bearing rocks, sandstones, and shale. The Colline Metallifere in particular, is extremely rich in heavy metals including iron, copper, silver, lead, nickel, and mercury. In addition, these hills are high in various sulfates, including pyrite, alum, and gypsum. This is particularly noticeable at Larderello, the world’s first active geothermal energy site. Here, high pressure sulfuric and boric acid vents are channeled into electrical generators, supplying over 1 million Italian homes.

These higher ridges tend to be dominated by macchia vegetation near the sea, with oak and locust forests dominating inland. These higher ridges are not suitable for agricultural activity due to their steepness and high quantities of heavy metals in the serpentine soils. The toxicity of the soil also makes it difficult for the native vegetative communities. Thus, the only communities that can thrive in these harsh environments include the macchia, stunted pine/oak woodlands, and grassland savannahs. Examples of these serpentine communities can be seen in the Livorno Hills (Hike 13) and in the Colline Metallifere (Hike 16). 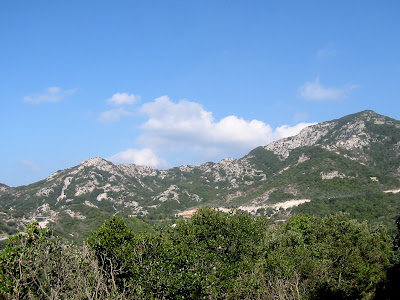 The higher, linear ridges separate the valleys and lower rolling hills into several distinct districts. Most visitors to Tuscany are familiar with the Chianti and Siena districts, just south of Florence, where most Tuscan tours operate. Most guidebooks for Tuscany focus almost exclusively on these districts. However, there exists several excellent hikes located in other lesser known districts including the Pisan Hills area (Hikes 14 and 15), Vinci area (Hike 20), and Volterra area (Hikes 17 and 18). The Maremma district (Hikes 1-5) is covered in the section on the Tuscan Coast and Archipelago. 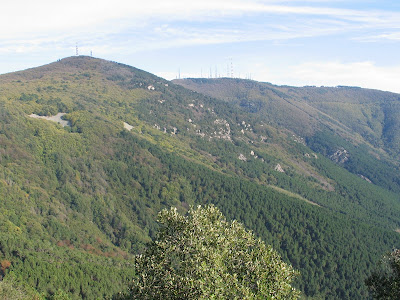