An Introduction to the Central Apennines and Adriatic 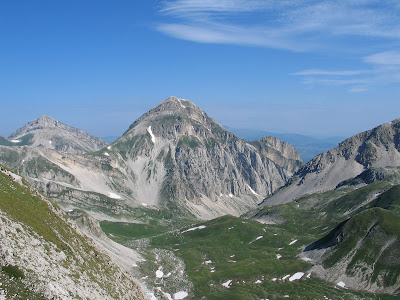 Some of the highest and most dramatic scenery in Italy, outside of the Alps, is found in the Central Apennines. Near the boundaries of the regions of Umbria, Abruzzo, and Le Marché, is the highest peak on the Italian peninsula, the Corno Grande at 2,912 m (9,552 ft). On the northern slopes of this peak sits the southernmost glacier in Europe, Il Calderone. In fact, the mountains of the Central Apennines are the highest peaks on the Italian peninsula, the result of intense tectonic pressures from the African plate colliding with Eurasia. The range is primarily made up of limestone and various other sedimentary rocks which accumulated at a time when the area was part of the ancient Tethys sea. These limestone layers give the mountains a white or light grey appearance. Many layers have been tilted due the tectonic forces which have shaped this area and these layers can be seen well on Monte Vettore and the Corno Grande. 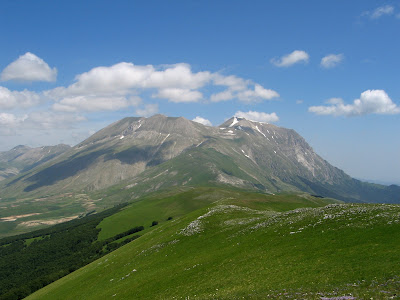 One of the most beautiful spots in the area are the Monti Sibillini, which rings the spectacular alpine basin of the Pian Grande. Sitting high above this basin is Monte Vettore, which is the 5th highest peak on the Italian peninsula at 2,476 m (8,121 ft). This basin and the ridges that encircle have much to offer. From here, you can watch shepherds tending their flocks of sheep, visit a rare alpine tarn with its own endemic species of brine shrimp, and watch paragliders soaring high above the mountain tops. 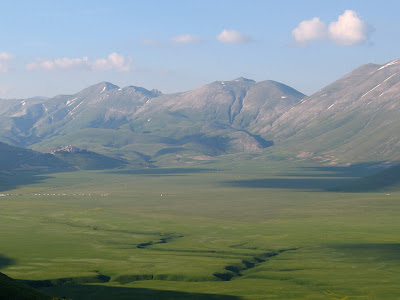 Just south of Perugia is another Central Apennine peak, the bald-topped Monte Subasio, which is 1,290 m (4,231 ft) high. At the base of this peak is the world famous village of Assisi. St. Francis wandered the slopes of Monte Subasio in search of solace and meditation, and developed his love of nature and desire to shed all worldly possessions here. 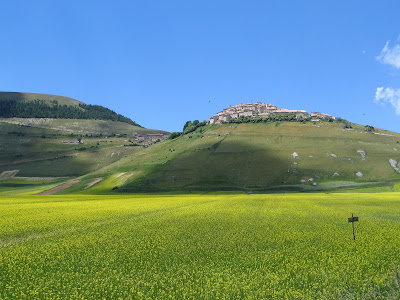 The Central Apennines have a distinct cuisine based on the foods of the forests, fields, and mountains of the area. The village of Norcia, located at the base of the Monti Sibillini, is famous for its wild boar sausage and truffles. Inside the Pian Grande, sits the village of Castelluccio, which is famous for its lentil soup and deep-friend stuffed olives, and let’s not forget the outstanding wines of Umbria. 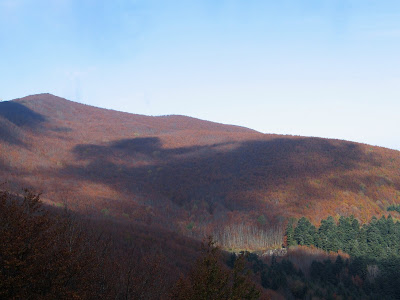 In between the central and northern sections of the Apennines, the mountains are significantly lower and are primarily covered in forests of chestnut and beech. But, just east of Florence, a two-peaked mountain rises suddenly above the others. Monte Falco and Monte Falterona at 1,654 m (5,425 ft) high provides the only alpine summits between Corno alle Scale and Monte Subasio and the source of the Arno River flows down from its sides. Here, due to the geographic isolation, endemic wildflowers grow. On the slopes below, small villages still earn their income collecting chestnuts and mushrooms in the forests. 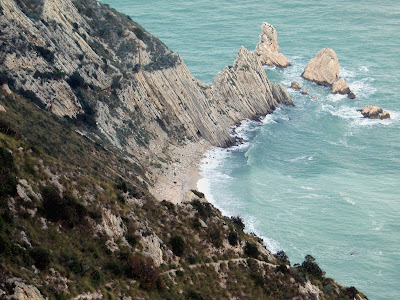 To the east lies the Adriatic sea. Compared to the landscape of the Tuscan coast, the Adriatic coast is gentle and the beaches sandy. Soft, sandy beaches, make this a very popular summer resort area. However, near Ancona, a mountain rises suddenly out of the sea in stark contrast to the surrounding landscape. The spectacular limestone cliffs of Monte Conero (Hike 43) drop 500 meters to the sea and sea stacks with highly tilted layers lay off shore. 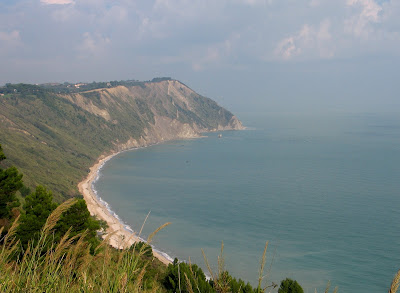 Northwest of Ancona, the tiny Republic of San Marino represents another location where dramatic high cliffs rise above the gentle, rolling hills of Emilia-Romagna, not far from the beaches of Rimini. San Marino is a touristic curiosity. It is one of the oldest and smallest republics in the world, having been founded in 301 AD. People visit see the old castles on the cliff tops, buy special San Marinese stamps and currency, and to just say they have visited one of the tiniest counties in the world. But, San Marino also offers an interesting hike for someone who wants to get out of the car and see the entire nation on foot! 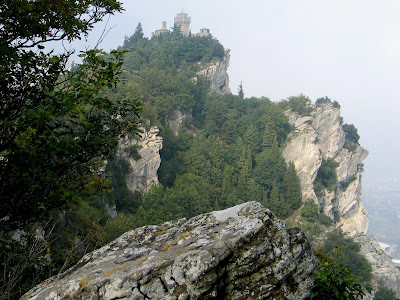