An Introduction to the Northern Apennines 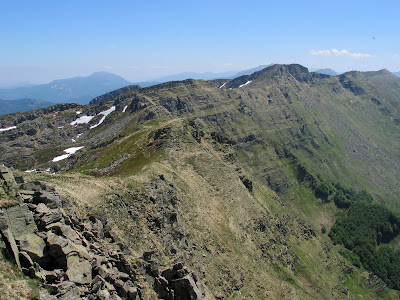 From the French border in Liguria, to the tip of the boot in Calabria, the Apennines form the backbone of Italy. Formed by tectonic processes, this range has been uplifting for the past 5 million years, as the African plate slams into the Eurasian plate, closing off the Mediterranean sea a few millimeters each year. The Apennines are uplifting at a rate of between 0.5 and 1 mm per year, while at the same time, the entire Italian peninsula is slowly rotating counter-clockwise, closing off the Adriatic sea, as the Italian peninsula merges with the Dalmatian coast. In addition, this rotation forces the Apennine chain to bend eastward, adding particular stresses to the northern and central portions of this range. The actual tectonic processes that contribute to the formation of this range, as well as, the many volcanoes in Italy, are not well understood. However, it appears to be an extremely complex combination of plate convergence where ocean crust of the ancient Tethys sea is subducting, continental collision of the African and Eurasian plates, and possibly some oceanic tectonic rifting near Mount Etna. 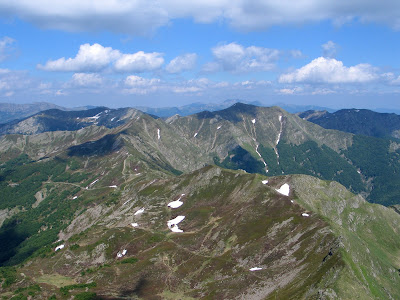 One things is clear, however, that there are some locations where the compression and uplift of the peninsula is more dramatic than average. Where these high ridgelines form and rise above the treeline, alpine ecosystems and fascinating ice age glacial features occur. The Northern Apennines are one of the highest segments on the Italian peninsula. The Northern Apennines range from the Ligurian coast near La Spezia south to just beyond Florence.
Many of the peaks of the Northern Apennines exceed 1,500 m (5,000 ft), with Monte Cimone (Hike 38) being the highest at 2,163 m (7,094 ft) and Monte Cusna (Hike 37) ranking second at 2,110 m (6,921 ft). Most of the high ridges above treeline offer beautiful alpine meadows and spectacular views of the surrounding landscape. 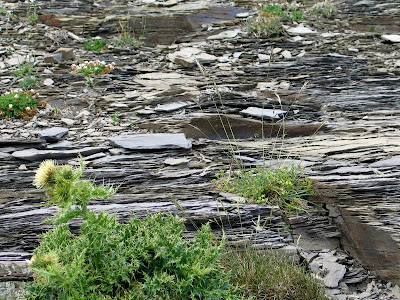 The range consists primarily of sandstones, clays, and other sedimentary rock that formed along the shores of the ancient Tethys sea some 200 million years ago. In places, sandstone has been metamorphosed into quartzite due to intense tectonic stresses. The action of the current tectonic uplift is extremely evident within this range, as the layers of sandstone tilted and twisted can easily be seen throughout the range. The southwestern faces of the range are lifted dramatically upwards as spectacular cliffs rising 1000 m or more above the deep valleys below, while the northeastern side descends more gently towards the Po Valley. This pattern indicates that the direction of the tensional strains are from the southwest. These thrust blocks are particularly evident from the A15 Autostrada from La Spezia to Parma when you look at the cliffs of the Apennino Parmanese (Hike 34). 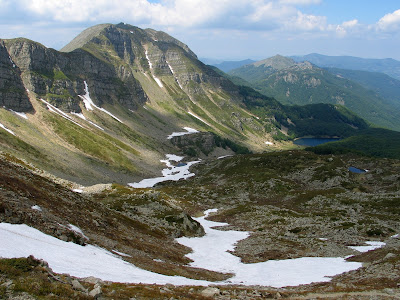 In addition to its more ancient past, the Apennine chain has been sculpted more recently by ice age glaciers, particularly in the north. The gentle northeastern slopes collect and retain more snow than the exposed southwestern cliffs, primarily because these slopes have more shade, less wind exposure, and fewer avalanches. Thus, the ice age glaciers generally ran to the north or northeast and most of the glacial cirques are oriented in that direction. Glacial tarn lakes spot the high ridges within these cirques. At the upper end of these cirques, high glacial headwalls rise dramatically up to the narrow arête ridgelines. These features are all particularly evident at Monte Giovo (Hike 39), Monte Sillara (Hike 34) and Corno alle Scale (Hike 40). At some locations glacial scrape marks can be seen where ice and rock slowly sliced into the bedrock. 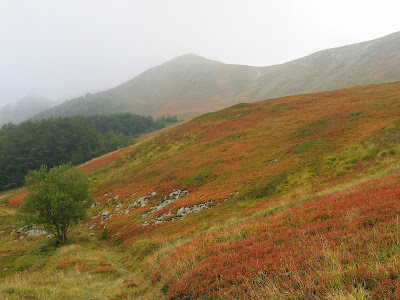 Today, beautiful alpine meadows and grasslands provide critical habitat to endemic wildflowers, Alpine marmots, and the rare Apennine wolf. Covered in snow during the winter, the meadows come alive in May and June with spectacular displays of wildflowers. In early fall, the blueberry shrubs turn magnificent hues of red and orange, while foxes and deer can be seen eating the ripe berries. 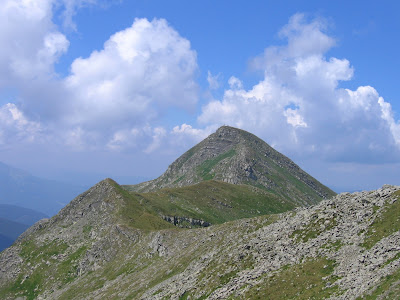 Administratively, the crest of the Northern Apennines forms the boundary between Tuscany and Emilia-Romagna.  Thus, when you hike in the range, you will often be crossing in and out of Tuscany. Emilia-Romagna names the segments of this range based on the city and province in which they fall and more historically speaking, where the source of each city’s waters come from. The primary mountain segments are the Appennino Parmanese (Parma), Appennino Reggiano (Reggio-Emilia), Appennino Modenese (Modena), and Appennino Bolognese (Bologna), among others. Much of the Northern Apennines are protected within the Parco Nazionale dell'Appennino Tosco-Emiliano, a loose conglomerate of several regional and provincial parks which are managed by the regional governments of Emilio-Romagna and Toscana. 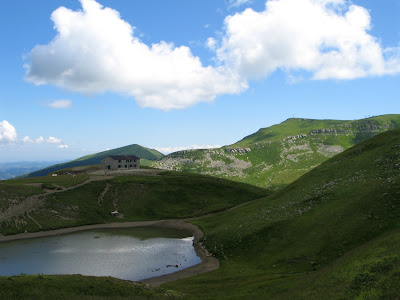 Crossing the entire length of the Northern Apennines is the Grande Escursione Appenninica (GEA), also known as the 00 Trail, which is a trail that goes for over 400 km from north of La Spezia south to just east of Arezzo. It is said to take 25 days to complete the entire excursion, requiring one to stay at various mountain huts (refugio) along the way. Several of the hikes in this section use parts of the GEA, while others access mountain peaks that are not on that route. But, the primary focus of the Northern Apennines section of this book is to provide hikers with an opportunity to see what the Apennines have to offer along the crest of this beautiful mountain range. 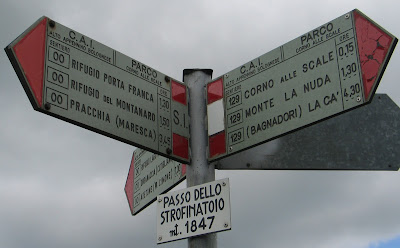