The Ecosystems of Tuscany

Tuscany contains a varied and rugged landscape that allows for a multitude of ecosystems containing thousands of plant and animal species. Tuscany is located in one of the world’s most important biological hot spots, the Mediterranean Basin. Here, an inordinate number of species are clustered together due to a unique convergence of environmental conditions including: warm and humid weather patterns with dramatic seasonal variation in precipitation, a variety of soil types due to a complex geological history, diverse topographic and elevational regimes, and being located near the intersection of three continents. Some 22,500 species of vascular plants can be found in this region; which is four times the number that can be found in the rest of Europe combined. 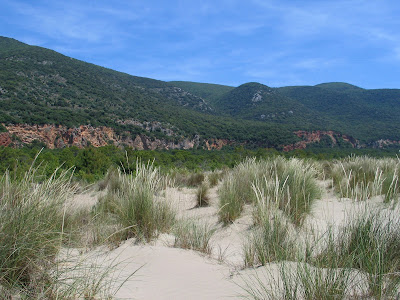 Beaches and Sand Dunes-  All along the Tyrrhenian Sea, on Tuscany’s west coast are strands of sandy beaches, backed up by sand dunes and sandy soil deposits, as far as, several kilometers inland. The sand dunes that experience a significant disturbance regime due to wind and wave action tend to be barren, except for grasses, annual wildflower plants (such goldenrods, curry plants, and lilies), and a few hardy drought tolerant woody plants which are stunted in growth form, such as juniper (Juniperus oxycedrus), maritime (Pinus pinaster) and Aleppo pines (P. halepensis). 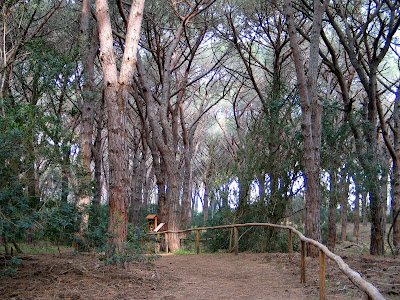 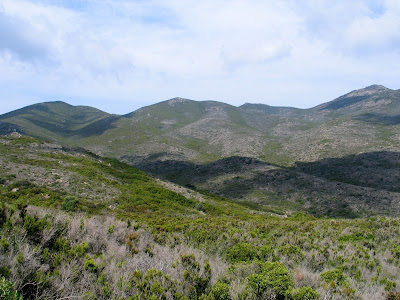 Macchia- The macchia or chaparral habitats in Italy occupy low elevation slopes that are well drained and exposed to the sun. These dense evergreen thickets of large shrubs and small trees are virtually impenetrable. The low canopy, generally only 2-3 m high, is dominated by holm oak (Quercus ilex),  tree heather (Erica arborea), strawberry tree (Arbutus unedo), mastic tree (Pistacia lentiscus), phyllirea, and various broom species (Ginestra and Sparticum sp.). In the understory, rosemary (Rosemarinus officinalis), lavender (Lavandula augustafolia), spiny oak (Q. coccifera), rock roses (Cistus sp.), and a multitude of other species, offer fragrant and colorful displays in spring when they burst into bloom. This is the ecosystem that has the most biological diversity in the Mediterranean Basin hot spot. The macchia is highly susceptible to fire due to their high vegetative density, the flammable oils found in many of the plant leaves, and arid, sun-exposed locations. They are becoming increasingly fragmented in Italy due to over-development and desertification of the Mediterranean basin. 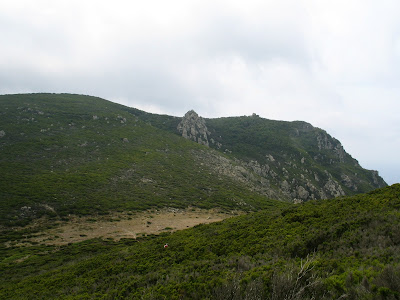 Garigue- Usually associated with the macchia, these open grassy areas are created by the effects of strong sea breezes, high soil salinity, arid conditions, and high solar radiation. Only very hardy plants can survive in these areas. Curry plants (Helichrysum italicum), thyme (Thymus sp.), euphorbs (Euphorbia sp.), and salt grass (Distichlis spicata), are often the only plants that can survive in these harsh locations. Along the fringes, rock roses and tree heather can also be found, as well as, the thorny dwarf broom on Elba. Usually found more commonly in southern Mediterranean locations such as Malta and Greece, garigue can be found on the saddles at the edge of the summit ridge of Capraia, along the exposed ridges of western Elba, on other Tuscan Archipelago islands, and at certain locations in the Livorno Hills. 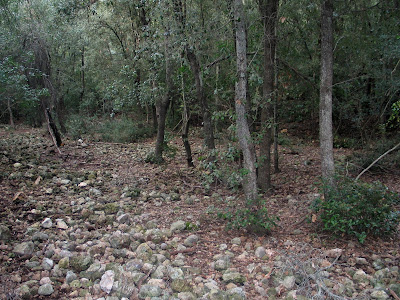 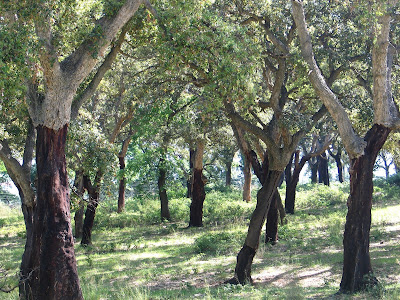 Cork Oak Savannah- An increasingly rare ecosystem in Tuscany is the cork oak savannah. These magnificent oaks (Quercus suber) with incredibly thick bark are stripped every seven to fourteen years to make cork for wine bottles. Cork oaks are obvious because they are stripped up to 4 meters above the ground. Where they are found, cork oak grow widely spaced in exposed dry areas with a grassy understory. They are more common in the western Mediterranean, such as on the Iberian peninsula. 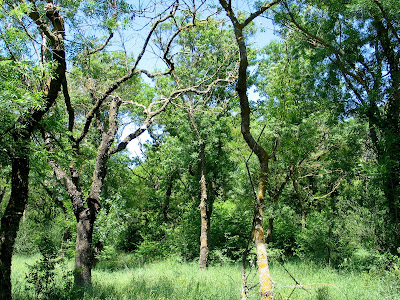 Riparian Ash Woodlands -  In wet, poorly drained soils at low elevation, where the water table is sufficiently close to the surface, beautiful riparian ash woodlands predominate. These ash can grow very large and in spring have a fresh green burst of growth. Ash are obvious by their pinnate leaves branching perpendicular to the stem. These woodlands often have a lush understory of grass and other annuals, as well as, riparian trees such as poplars (Populus sp.), alders (Alnus sp.), willows, maples (Acer sp.), and elderberry (Sambucus nigra). Pure stands of ash have become quite rare, but an old-growth stand can be found at Sterpaia.

Chestnut Forests- At medium elevation sites in the foothills of the Alpi Apuane and Apennines, European chestnut forests (Castanea sativa) become the dominate forest type. These forests are in many places virtually mono-specific. Chestnuts prefer cooler, north aspects, while more exposed southern slopes at the same elevations, may still retain oak woodlands up to 500 meters.  Forming a dense canopy, chestnut forests are dark and moist, allowing for an understory of ferns and other water-loving annuals. Chestnuts grow to heights of 30 meters or more and in fall produce prodigious quantities of nuts. They are fun the collect on the way down from a mountain hike and still remain a vital part of the income for many rural Italian villages. The only other chestnut species that grows to canopy height is the now virtually extinct American chestnut. Although the blight did affect the European chestnut, it proved more resistant to the disease and forests of the chestnut remain intact. Other trees that can be found associated with chestnuts include hop-hornbeam (Ostrya carpinifolia), European hornbeam (Carpinus betulus), maples, and quaking aspen (Populus tremulus).
Beech Forest- At higher elevations (above 1000 meters) chestnut forests begin to give way to European beech (Fagus silvatica), especially on northern slopes. Significantly shorter and thinner than beech trees north of the Alps, these stands of beech often grow like dog-hair forests with a dense light green canopy and virtually no understory. However, near springs and on north slopes, ferns and other water-loving plants can be found in the understory. In some locations, white fir (Abies alba) and mountain ash (Sorbus sp.) can be found in scattered clumps and birch (Betula sp.), hop-hornbeam, and aspen can be found along stream beds. Valued for their timber, many forests were harvested over the centuries and regrowth is in progress. Beech forests can be found near treeline throughout the Alpi Apuane and Apennines and their distribution is often controlled by the grazing activity of sheep and goats. In many locations, stands of beech will suddenly end at a fence or cling precariously on a steep slope where they are out of reach of grazing animals.
Alpine Meadows- The treeline in Tuscany is quite low compared to other locations in Europe or North America. At only 1200-1500 meters, beech forests will give way to grassy alpine summits along the ridgelines of the Alpi Apuane and Apennines. Some of these alpine meadows are maintained below their natural elevations due to the grazing of sheep and goats.  In other cases, poor rocky soils, hot dry summers, and exposure to high winds and winter cold have combine to created an environment where only the hardiest plants and spring annuals can survive. Grasses, stunted blueberries (Vaccinium sp.), and alpine wildflowers predominate in these open habitats.  In terms of scenery, these are crown jewels of Italy. Glacial features from the last ice age such as cirques and tarns, are also visible on the mountain slopes. 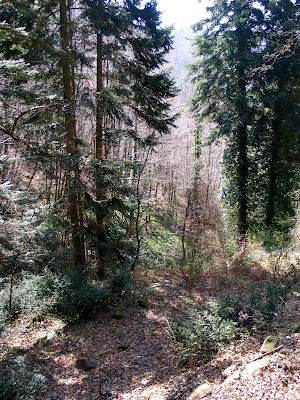 White Fir Forests- The European white fir once dominated the mid-to-higher elevation forests of Italy. Relicts of the ice age, they rely on moist well-shaded slopes. They were heavily harvested for centuries for the construction of wooden sailing vessels. Like the closely related Spanish fir (Abies pinsapo) and the extremely endangered Sicilian fir (Abies nebrodensis), European white firs faced their greatest exploitation during the era of the Roman Empire and then again during the explosion of trade and exploration of the Renaissance. Where they were once dominant, white firs have generally been replaced by chestnuts and beech. White firs can still be seen in isolated patches and individual trees in the Alpi Apuane, in the Northern Apennines, on Monte Falco, and on Montalbano.
Posted by The Hikemasters
Newer Post Older Post Home