An Introduction to Cinque Terre and Ligurian Coast 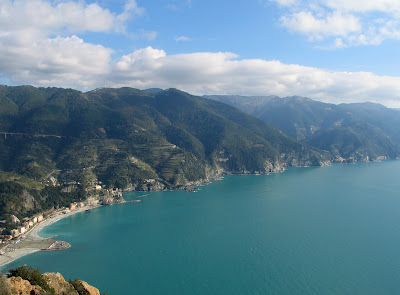 The Cinque Terre (meaning five-lands) was once an isolated strip of rugged coastline that was disconnected from the rest of the world. In fact, until the train-line was built in the 1870’s to connect La Spezia and Genoa, by tunneling through the high cliffs, the only way to reach any of the five villages was to hike in or by boat. This isolation resulted in unique cuisines and customs. As the land was so steep, keeping animals was very difficult, therefore most of the cuisine was seafood based.  Pesto and focaccia are also local specialities. Even after the train line was put in, driving was still impossible until the very narrow-winding roads were built in the 1960’s. 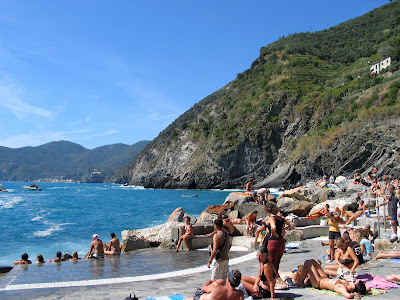 Today, the Cinque Terre has been discovered as one of the premier visitor destinations of Europe. Flocks of Germans, Americans, Dutch, and just about everyone else come to experience the spectacular cliffs, beautiful little fishing villages, and azure blue waters. Despite the boon of tourism, the villages still maintain their old-world charm, while a stroll through the terraced olive groves and vineyards takes you back to the middle ages. While the crowds have increased, it is still possible to hike much of the area relatively undisturbed, if you come in the off-season. In fact, during our visits in the winter and early spring we found virtually no hikers on the trails. In addition, the mild climate of the region in winter allows hikers to climb the steep cliffs in cool, refreshing air, rather than sweating profusely as one would in summer. 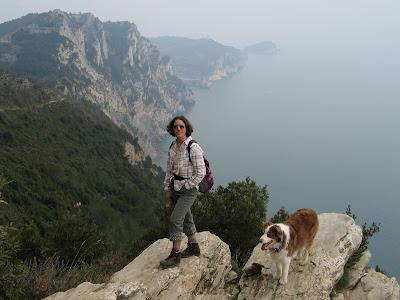 In addition to the five main villages, there are lesser known routes leading to Portovenere and Levanto on the fringes of the Cinque Terre that see far less traffic, but provide even more spectacular scenery! The Cinque Terre can be traversed in two major routes: the coastal stretch and the ridgetop. To do the whole thing from Portovenere to Levanto in one day would be suicide. Instead, this guide has broken it up into three coastal segments for your convenience. However, there are a multitude of side-routes and other options, should you wish to combine or alter any of these routes. 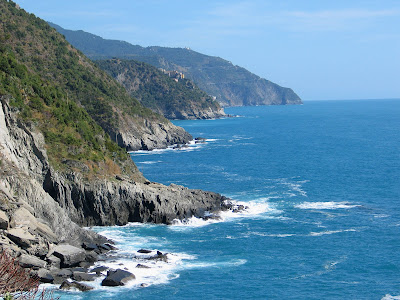 One major recommendation: Do not drive here! The roads are ridiculously narrow, the curves sharp, and parking is virtually non-existent. The best way to visit the Cinque Terre is to park your car in one of the cities outside of the Cinque Terre that is along the rail line such as La Spezia, Massa, or Sestri Levante, and take the train in. One of the best places for getting to and from the area is to park at the train station in Viareggio, because it is a relatively small city with an adequate amount of parking. Of course, if you don’t have a car, you can also take the train from Pisa or Genoa. 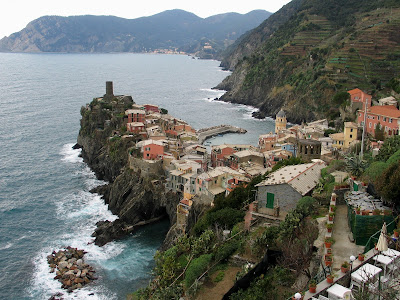 A common way to visit the Cinque Terre is to establish a home base in one of the villages, where you have a room for a couple of nights. Then, you can hike down the coast to another village and take the train back. The next morning, you can take the train back to where you ended the day before, hike further, and take the train back again! The trains generally run once an hour, but just be aware that not every train stops at every village, so check the schedule ahead of time. In summer, there are also ferries that run from La Spezia and Viareggio that stop at all of the coastal villages, except Corniglia. This is a spectacular way to see the cliffs and villages from a completely different perspective than the trails provide. 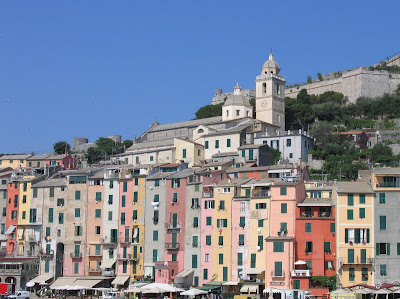 Although, the Cinque Terre gets much of the fame, other spectacular hikes await throughout the Ligurian Coast. Portofino, just a short ways from Genoa, is also famous with tourists and celebrities for its beautiful harbor and spectacular sea cliffs. However, in winter and early spring, this area is free from the crowds and solitude is easy to find. For those who wish get off the beaten track and see sights similar to the Cinque Terre, the hikes of Montemarcello-Monte Murlo and the Amphitheater of Moneglia are excellent choices. The cliffs are just as dramatic, the vegetation similar, and traditional quaint villages are still available at the end of the walk. The Amphitheater of Moneglia also offers visitors an opportunity to study the natural regeneration of the coastal pine forests and macchia following catastrophic fires that burned the area in 2003. The rock roses and other wildflowers are spectacular along this route in spring, and the opening of the canopy has exposed incredible views of the entire Ligurian coast.
Posted by The Hikemasters
Newer Post Older Post Home