An Introduction to the Geology of the Alpi Apuane 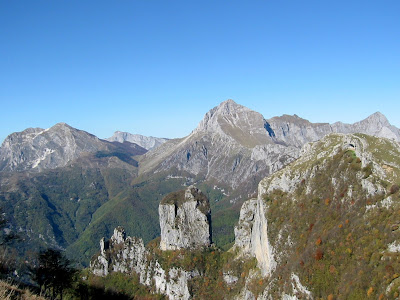 The Alpi Apuane are a small but, extremely rugged range of mountains located along the northern Tuscan coast from Viareggio to La Spezia. They range in elevation from 1,200 m to nearly 2,000 m in height. This mountain range is a metamorphic core complex associated with the Northern Apennines, although it is further west and disconnected from the rest of the Apennine range by the deep valley of Garfagnana. This range is primarily made up of marble, with other metamorphic carbonate rocks and various sedimentary layers also present. Marble is formed when limestone is placed under great pressures and temperatures, which causes it to melt and recrystallize. Marble, like limestone, dissolves when in contact with water containing acids. 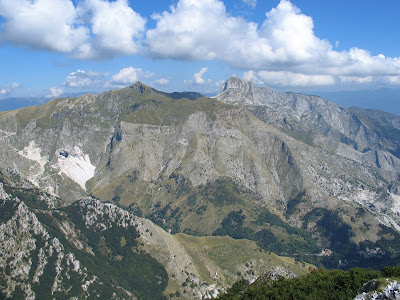 Thus, millennia of rainfall containing weak carbonic acid has caused the marbles of the Alpi Apuane to erode into very deep gorges, steep cliffs, narrow knife-edge ridges, and over 200 known caves. There is even a large, free-standing arch on Monte Forato (Hike 24). These rugged erosional features and the proximity to the sea, make the range look larger and more mountainous than the relatively low elevations would indicate. Anyone driving on the A12 Autostrada between Pisa and La Spezia will be in awe at the enormous wall of shear cliffs rising 1,600 m above the sea. In fact, the summit of Monte Altissimo (Hike 26), which appears as one of the highest peaks in the range from the coast, is located only 10 km from the beaches. From the north, coming from Parma, the Alpi Apuane are so steep and sharp that they look to be almost overhanging. 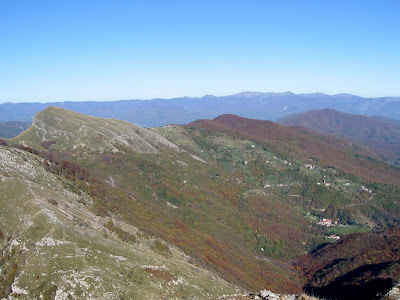 The forests of the lower Alpi Apuane consist of chestnuts and holm oak stands. Higher up, the forests change over to scrubby beech woods and scattered white firs. At about 1,500 m, subalpine grassy meadows and heath moorlands open up to the mountain summits. The Alpi Apuane gets very little snow, despite their high elevations, as the proximity to the sea moderates the temperatures. So, while 1,800 m elevation in the Northern Apennines may have two meters of snow on the ground, the same elevation in the Alpi Apuane may only have a dusting. Nonetheless, if you choose to hike in the winter, be aware that ice from melting snow or rain that has frozen overnight may cover the trail and make already difficult hikes all the more dangerous. 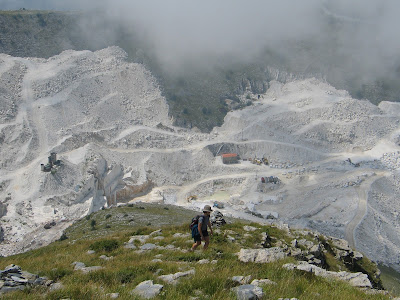 The Alpi Apuane is one of the world’s leading sources of high-grade marble. In fact, the quarries (cave) of Carrara have supplied the statue-quality white marble to artists and engineers for over 2,000 years. The sculptures of Michelangelo, the marble façades of ancient Roman buildings, and great cathedrals throughout Europe, have all used marble from these quarries. Today, you can hike in and amongst these active marble quarries (Hikes 25, 26, and 27), as well as, on top of the natural exposed substrate which has not been harvested. From a distance, the tailings from these quarries, such as on Monte Corchia, look like glaciers running down the mountain slopes because they are so white. In fact, the marble is so abundant that the breakwaters and sea walls in Marina di Pisa (Hike 11) are made of huge blocks of lower quality marble, not suitable for buildings or sculptures. 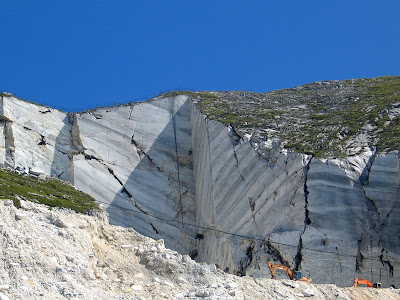 There are also many other metamorphic and sedimentary layers that are intermixed with the marble core. A kaleidoscope of colors are present, including silvery schists, green slates, red mudstones, brown shales, white quartz veins, and a variety of multi-colored gneisses. This is especially evident on Monte Fiocca (Hike 25). 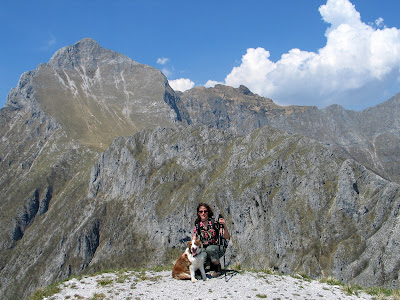 Hiking in the Alpi Apuane is an incredible and sometimes terrifying experience. The ridgelines are extremely narrow in many locations and often the footing is not great. There are places of some exposure that require you to use your hands to climb up. Some trails are labeled EE (Escursionisti Esperti), which means it is a straight drop several hundred meters, and you should not try without climbing gear. But, the views are indescribable, as from the summits of many peaks, you can see the snow-capped Northern Apennines, including Monte Giovo and Monte Rondinaio, Monte Cimone, and Corno alle Scale across the Garfagnana valley. To the west the islands of the Tuscan archipelago, the Cinque Terre, and if the weather is exceptionally clear, Corsica and the Maritime Alps of Southeast France can be seen across the Tyrrhenian sea. The hikes in this book are reasonably safe but, if you are afraid of heights, be warned, there are some places that will make you question why you decided to give that particular summit a try.
Posted by The Hikemasters
Newer Post Older Post Home